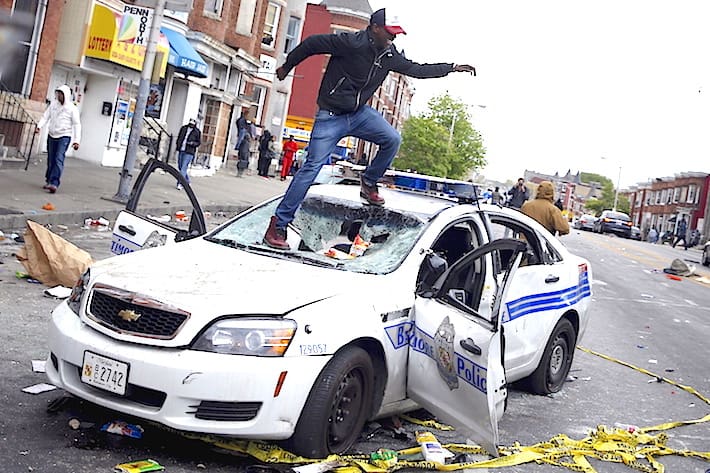 Baltimore riots: the fire this time and the fire last time and the time between. Protests erupted Monday, April 27, 2015 into violence in Baltimore following the funeral of Freddie Gray, a black man who died after being taken into police custody. The Conversation website asked four scholars to comment on the implications of the riots, which occurred 47 years after Baltimore exploded after the assassination of Dr Martin Luther King Jr.

Demonstrators jump on a damaged Baltimore police department vehicle during clashes in Baltimore, Maryland April 27, 2015. Several Baltimore police officers were injured on Monday in violent clashes with young people after the funeral of a black man, Freddie Gray, who died in police custody, and local law enforcement warned of a threat by gangs (REUTERS/Shannon Stapleton)

The root causes of Baltimore riots

As Baltimore burns and images of violence and mayhem fill our screens, many people are asking why? Why does the death of one young man cause a city to go up in flames?

Any event has multiple causes, but there are at least three background factors that we should bear in mind.

The first is the recent momentum of the police brutality narrative: since Ferguson in 2014 we have become witness to mounting evidence of police brutality. A US Department of Justice report on the Ferguson police department revealed routine rights violations and racial bias. It is not unique. In April in South Carolina, a white police officer shot an unarmed black man eight times in the back, killing him for a minor traffic violation. The images of police violence and community perceptions of cover-up have become increasingly common, with each case reinforcing the sense of injustice.

The second is the lack of trust between police and minority black populations. Despite more black officers and more blacks in senior positions, there is still a gulf between blacks and police departments that community policing measures have failed to bridge. This turns into a chasm between poor blacks and the police because of the “active” policing of low-income areas.

The legacy of policies of the tough on crime approach, the war on drugs and the militarization of police constitutes a police insurgency against low-income black communities. Young black men are stopped more frequently and jailed more often and longer than white counterparts for similar activities. In Baltimore, one in three males can expect to spend some time in jail during their lifetime.

The third element is the stifled economic opportunities and limited social mobility of many inner-city residents. Rising inequality in the US has meant a small minority has done well, the middle class is squeezed and those of lower income are trapped in funnels of failure. For young people caught in a web of multiple deprivations, street violence is commonplace.

One of the sites of the rioting in Baltimore is in the blighted neighborhood of Sandtown-Winchester, which was also the scene of rioting in 1968. Over 37 years later little progress has been made in a community that is 96% black and where 47% of children live below the poverty level, more than double the national average. Some have moved out and some have moved on, but for those left, Martin Luther King’s Dream is still just a dream.

I fear that that the violent images will lead to only a very limited law-and-order debate. Street violence is unacceptable but the tragedy is that minority areas are not just places of criminal activity, they are sites of victimization.

A law-and-order debate should be focus on reducing violence against low-income minority residents who are the primary victims of violent crime in Baltimore and across the nation. This country needs to address structural issues of poverty and economic opportunity as well as immediate concerns of how we make the streets safer for all our citizens.

Re-Development and the uprisings

Today, the news media will look over the aftermath of yesterday’s uprising in Baltimore and take stock of the burned remains of cars and storefronts. Reporters will also see the shells of 46,000 empty lots and vacant homes lining the neighborhoods that were riven by unrest.

However, the media and its audience must be careful not to think that the burned-out look of so much of the city is the result of this recent unrest, or even of the uprisings of 1968, which followed the assassination of the Reverend Martin Luther King Jr.

Baltimore’s blight is the result of decades of disinvestment, from the blockbusting and white flight of the 1950s, the urban renewal policies of the 1960s, and the evacuation of the largely poor and black neighborhoods of East Baltimore to make way for the expansion of Johns Hopkins University taking place today. Development has long been uneven in Baltimore, and black folks and their neighborhoods have consistently been left out of that development.

What we are seeing today could only have occurred against this backdrop of planned uneven development. One of the dangers of seeing the riot as an event is precisely this danger of losing historical perspective about the ways the neighborhoods burning on television are the very ones that have been cut off from the growth of the city’s downtown core.

When asking what can be done, it is important to get to the root, to ask and see how these neighborhoods have been constituted as the ones that will burn, figuratively and literally.

Going beyond the burning

When the sun rose Tuesday, the toll of Monday’s riots in response to the death of Freddie Gray in police custody were laid bare: 20 Baltimore police officers injured, the charred skeletons of cars and looted businesses, and over 200 arrests.

However, the cost of the Freddie Gray riots cannot be measured in dollars and lives alone. For communities and police alike, the death of Freddie Gray and the violence that swept through the streets of Baltimore cut deeper than burned businesses or hurled cinder blocks.

For minority residents, the death of Freddie Gray is proof par excellence that the protests after the deaths of Mike Brown, Eric Gardner, Tamir Rice, and too many more have been futile. It’s proof that the battles of the Baltimore riots of 1968 are still being waged, and that police and the powers that be still see and treat protests and protestors as problems to be controlled.

For police, Monday’s violence is angering. They see people willfully destroying their communities and attacking police officers. What they do not see is powerless, unheard victims of centuries of racism, segregation, and inequality.

For both sides, the last few days in Baltimore are only the most recent in a long and tumultuous history of mutual distrust and fear between police and communities of color. To make matters worse, when the smoke clears and the glass has been swept up, neither side is likely to have changed their mind about the other.

The road to reconciliation must begin in the same streets now marred by violent unrest. Just as distrust and fear have been born out of decades of interactions between police and citizens, it is through one interaction at a time that we can begin to heal the wounds that scar the public and police.

Recent developments like the federally funded National Initiative for Building Community Trust and Justiceharness the power of procedural justice and racial reconciliationto build trust and establish the legitimacy of law.

In lieu of the truncheon, these strategies leverage respect and honesty to built trust that can enhance the safety of citizens and police alike.

It is not an easy road, and much work remains to be done, but the fires and blood in Baltimore make it all too clear that the time to dedicate ourselves to building trust between the police and the public is now.

In its fourth season, the television drama The Wire, set in Baltimore, offered us a glimpse of the systemic tragedy of a public education system.

And yet the critically acclaimed series missed an important element of its expose.

While we gazed upon the limited academic opportunities within the schools and the disparate lives of the children who attend them, not once did we experience the pent-up frustration and bitterness of these young people – and the trauma that is inflicted upon them. Instead, we came to understand the politics and policies behind a system that failed to educate the children and made them pawns, rather than players in their own destiny.

The recent rioting and looting in Baltimore included participation by some school-aged children. The festering sore of inequality and inequity remains unhealed and unresolved.

The closing of Baltimore City Schools on Tuesday was a decision that considered the safety of our children who mostly navigate the city on public transportation rather than school buses. (The city ceased running its own transportation system exclusively years ago in an effort to reduce costs).

However, we also missed an opportunity to create spaces in public, safe places (ie schools) where youth could express their continued frustrations and strive toward healing.

In urban centers like Baltimore, mental health professionals are key personnel who assist youth in need. But inadequate resources and budget deficits jeopardize these services.

While grant opportunities and federal funding are available to school districts across the country for Common Core standards and test preparation, such emphasis is not extended to urban centers whose students experience subpar living conditions and psychological trauma as a result of abject poverty, drugs, crime, and violence affecting their communities, and in turn, their mental health. This is despite the fact that such conditions assuredly impact the academic ability of students.

Additionally, even when the data confirm that school buildings are deemed the best place to reach students in need, school psychologists, for example, are ever fewer in number. And those psychologists that do work in schools spend considerable time fulfilling federal special education mandates such as creation of individualized education programs (IEPs) for students with disabilities, leaving them little time to address the social and psychological development of children.

Now we are faced with the next generation of marginalized youth who demand to be heard, even as they are seen as counterproductive by those who continue to ignore their physical, academic, and psychological needs to be successful in an educational setting.