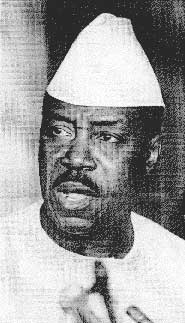 Guinean politician, ex-Prime Minister and Minister of Planning and Statistics.Beavogui was one of the closest associates of President Sekou Touré serving in the most important ministerial portfolios.

Born in Macenta in the south near the Liberian border in 1923, Louis Lansana Beavogui went to the School of Medicine and Pharmacy in Dakar where he trained as a doctor. He worked first as Assistant Medical Officer in Guekedou, southern Guinea and then as medical officer in Kissidougou, north of Guékedou. It was there that Beavogui’s political carcer began in 1953 as a town councillor and a year later as Mayor of Kissidougou. In 1956 he was elected to one of the three Guinean seats to the French National Assembly, Sekou Touré and Saifoulaye Diallo being the other two. The following year he was appointed Minister of Trade, Industry and Mining.

In 1958 Guinea became an independent republic with Sekou Touré as Head of State and Bevavogui was appointed Minister for Economic Affairs and Planning.

In 1961 he became Minister of Foreign Affairs which catapulted him into the international arena for eight years, during which he helped to shape the deeply nationalist foreign policy of Guinea at the time. At the Conference of NonAligned Nations in Belgrade in 1961, he proposed the admission of China to the United Nations. He was involved in the UN debate on the Congo in 1966.

Beavogui reflected the nationalism of his President and his vision of the continent, and while Sekou Touré was alive was widely regarded as his natural political successor

In 1969 he was appointed Minister of Economic Affairs, a vital ministry considering the pallid state of the Guinean economy. At the ninth Congress of the Parti Démocratique de Guinee (PDC.) in 1972, the post of Prime Minister was created and Beavogui was appointed to it, as well as being in charge of the Army, Foreign Affairs, Financial Control and Information. Two months later the Ministry of Foreign Affairs was given to Fily Cissoko. Beavogui was still Prime Minister when Sekou Touré died in 1984, and it fell to Beavogui to head the government as interim Head of State. Within a week, however, on 3 April 1984, the military took over and Beavogui and other members of the government were placed under arrest. He died that same year at the age of 62 in hospital in Conakry, having been transferred because of ill-health, from prison in Kindia where he had been detained since the coup.